Here –  Once the Marvel producer comes into the interview, he speaks quite a bit about working with “Rich”  Armitage ( 23:28) Apparently, RA transformed from a  warm Brit to a monster, “like a virus taking him over,” rolling on the floor “as if he were an animal.” “Didn’t expect Thorin from the Hobbit getting down and dirty and feral”…he literally lost his voice.” Was physically active and very worn out.

Continued  here. If you haven’t been able to find it with your premium membership, this is a direct link to Marvel After Show podcast.   ( 30 minutes long, includes interview with producer) There seems to be an After Show for Episode 1 with guest Ben Percy, but I didn’t get the direct link for that.  If you have the link, please share.

It’s only so-so and very like Berlin Station after shows, in that the moderators just parse the plot and tell you what you probably already know, or have suspected if you’ve been listening.

Continued from here. Okay then. Another 32 minutes, and lots of Logan/Wolverine.

Just for a little more background, this story incorporates the trope of federal investigators vs. local cops. The female fed (Agent Pierce) is a hard-ass, professional no nonsense agent; her partner (Agent Marshall) is nondescript. They’re working with local cops, including a wet-behind the ears newbee. The feds are in it because of the deaths on the boat, which was in federal waters. The locals are looking into the murder of two local woman, with hints that they were killed by bears – which is quite rare.

The story is mostly told through conversations among the cops, fed and local, detailing their investigation – which then morphs into flashbacks, where the scenes are acted in the present tense by other actors. [ETA] After writing this, I read the director’s interview (Brendon P. Baker)linked by Servetus here , and he explains the method of story-telling better than I.

There is, as I mentioned earlier, some cult in the area They call themselves  The Aurora, whose leader is forecasting The Long Night. We learn more about it, and it has something to do with death and may draw on Good Night Moon, a favorite children’s book)

As I mentioned, Logan is an immediate suspect because of Capt. Washburn’s story about the overboard fisherman, as well as some other info gleaned from witnesses who have encountered him or seen strange things in the woods. On the other hand, Logan has some supporters ( with little or no clout), and there hints that let the listener know that Logan is not a pure evil creature.

The agents find and toss Logan’s house and find a letter he wrote to a lover in New Orleans, but didn’t send. This letter, read in Logan’s voice (Richard Armitage) gives us more background to who/what Logan is, i.e part of his origin story – that he’s a superhuman (mutant) who escaped from Weapon X and how he came to be in Alaska.

I don’t want to say more about the plot because of spoilers. So far, it’s a good mystery. I wish they’d lay off how short Logan is ( 26″ inseam) but I’m working on it.

I think Richard Armitage is doing well with his sort of western accent ( still has the intrusive r at the end of words typical of Brits doing American) – but a good job  in a low, gravelly voice.

Overall, I’m finding this podcast series entertaining and gripping.  I think I’m in for a mini treat once a week – though again, I would rather binge).

Finally got it on Stitcher – more about that below.

Wolverine: The Long Night is a recurring podcast on Stitcher Radio, with only Episode 1 released, at 29 minutes.

There are a number of mysterious deaths in a small fishing town, Burns Alaska, which federal agents arrive to investigate. Some of the deaths are blamed on bears, but not all. A crew of fisherman were found dead on their boat, and the captain is missing.

Before much happens, we learn about some radio broadcasts ( we actually hear one) from unknown people, warning of The Long Night coming to Burns. ( Winter is Coming?) This cult or group is foreshadowing something to come – we’ll see.

The cops find the captain ( Washburn) and he’s interviewed.  He missed work that day, so he escaped death and also didn’t know  his men had been murdered, but he  has a terrible story to tell.   A man fell overboard off the fishing boat when his arm got caught in a trap. Definitely a death sentence, he says.  The “new guy” goes in to find the victim, but he isn’t so heroic, in fact – as reported, he’s almost superhuman and quite violent. He “scowled uglier than you’ve ever seen.” But he did save the other guy’s life, with some necessary damage.

It’s not until we hear the story of the sea rescue from Washburn that we hear Richard Armitage as Logan ( Wolverine). One sentence in 29 minutes. Disappointing? Not really we have 6 1/2 hours to go. I’d rather have a binge listen, but this’ll work.

I think the acting is good and there aren’t as many audio distractions as I found in The The Martian Invasion of Earth.

There’s an issue I have to overcome here, and that’s the physical description of Logan/Wolverine. I know how Washburn describes him, is canon. Logan is short, wide and hairy – something Marvel decided to dispense with when they cast 6’2″  hunk,Hugh Jackman, in the role. So my issue is, while listening, I imagine Logan/Richard Armitage looking something like his John Proctor and/ Francis Dolarhyde. I even detected a teeny little lisp in his one line. So, I’m taking the Marvel approach – my Wolverine is tall, dark and ruggedly handsome – maybe a little hairy.

I’m looking forward to the second episode. This is going to be entertaining, and a boatload of fun listening to Richard Armitage in this.

Re Stitcher Premium: I still can;t get it to play on my laptop even though everything is downloaded, but it worked fine on my phone. I used ear phones.

OH WOW! As I was writing, Episode 2 came on. See ya later with some more detail.

Here’s one: and another link found on The Book of Esther and from Nerdist 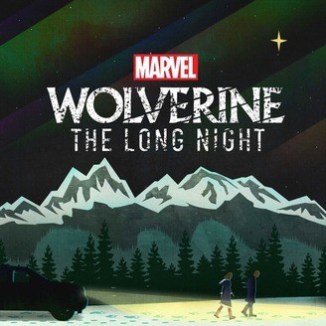 The irony that Peter Jackson cast 6’2- 6’3″ Richard Armitage to play a dwarf under five feet has been the fodder of interviews and fan talk for years.

Funny thing, that. It turns out,  the “real” comic character, Wolverine is only 5’3″ tall. One of the potential pitfalls in casting Hugh Jackman for the role, was that he’s about the same height as Richard Armitage. ( In both cases,  reports of the exact measurement vary). 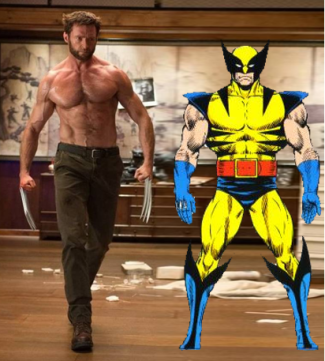 Here    is a discussion of how the directors handled the disparity. My research revealed that many comic book fans were outraged that Wolverine was going to be played by an actor of  over 6′ in the X-Men films, because his height was integral to his character. Sort of how angry Hobbit fans were about Richard Armitage being cast as Thorin (impossible!)

The film-makers thought a very short Wolverine, towered over by female actors,  would not be sexy enough for the film, so they didn’t take much care in making Jackman look  shorter after a few films.

I have no dog in this fight, but hey:

Guylty’s got the goods.

I think I watched the end of one Wolverine film. Plenty of time to bone up on the character before this Spring. What do you think? Do you know the first thing about this mutant superhero?