Lots of tweets on a few subjects in a short period.  ( see below) I was going to say Chatty Cathy, but on reflection, I now think that descriptor is just the wrong side of sexist – which wouldn’t at all square with the woman power  he’s underscoring in some of them.

And then there are two tweets referencing his dad’s teasing about some of the son’s roles. Very unusual for him. I guess they’re doing alright. It would be cool if Mr. Armitage, Sr. follows his son on Twitter. I think he’d get a kick out of those tweets.

And finally, thank you Digital Spy, for giving fans at least one interview on Ocean’s 8 devoted to Richard Armitage. I think the closest we got so far, was  from The New York Times reviewer who liked the film, but trashed the Claude Becker plot line. Haven’t  seen the film yet, but I think he was wrong: revenge and pay back are consistent with every Ocean’s film.

Tomorrow is Ocean’s 8 day for Perry. Very unusual for me, I’m taking around a dozen friends to the opening in our town tomorrow afternoon. Stay tuned. Based on the reviews and my own opinion all along, I’m expecting to be entertained and highly amused by watching Richard Armitage in a totally different sort of role – and a blockbuster at that! Here are the tweets:

My Dad keeps joking that I'm in the 'all female' Oceans reboot….he's kinda gotta point!!😂🙃 https://t.co/Tq7YfnIlZe

He's also got a lifetime of 'Tall Dwarf' Jokes…but it has been kind of an ironic career really 🙃🤡 https://t.co/xmBwH25FXz

‘Man-Free’ was an off the cuff joke. I’m a man, Corden is male…one of Claudes Borzois dogs was chap!! But great to be part of a piece with so much good energy. Supremely talented and hard working cast and crew. X https://t.co/Vgw49502vL

I’m currently working with Julie Delpy. Writer, Director, Producer Actor (Mum and Wife) all in the same moment. To me the ability to do this is extraordinary…Julie makes it look like child’s play.

The irony that Peter Jackson cast 6’2- 6’3″ Richard Armitage to play a dwarf under five feet has been the fodder of interviews and fan talk for years.

Funny thing, that. It turns out,  the “real” comic character, Wolverine is only 5’3″ tall. One of the potential pitfalls in casting Hugh Jackman for the role, was that he’s about the same height as Richard Armitage. ( In both cases,  reports of the exact measurement vary).

Here    is a discussion of how the directors handled the disparity. My research revealed that many comic book fans were outraged that Wolverine was going to be played by an actor of  over 6′ in the X-Men films, because his height was integral to his character. Sort of how angry Hobbit fans were about Richard Armitage being cast as Thorin (impossible!)

The film-makers thought a very short Wolverine, towered over by female actors,  would not be sexy enough for the film, so they didn’t take much care in making Jackman look  shorter after a few films.

I have no dog in this fight, but hey: 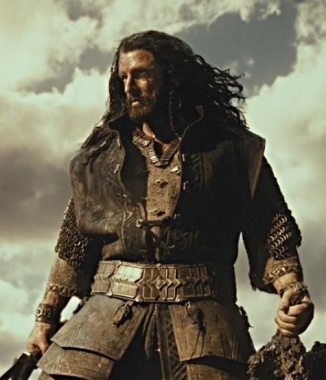 Guest Blogger Micra (Microlina on Tumblr) shares her first impressions of Richard Armitage. Micra’s native language is Italian ( or so she claims) and this is unedited.

I first saw Richard Armitage as Thorin, almost exactly one year ago. I didn’t know who the actor behind the prosthetic was, so I Googled for him. Since I have a tumblr, I searched for blogs about him and then looked for his previous works. I noticed a mini series about the Impressionist painters, that I love, so I decided to watch it. I don’t know anything about art, can’t draw to save my life, and I can’t critically judge a painting. My only criterion to evaluate a piece of art is emotion. If I am moved, find peace, burst into tears, deeply intrigued, then it’s art for me.

When I start watching the brief mini series I was thrilled to see how the arrangement of some object (fruit, people’s clothes, flowers in the very first scene with young Claude Monet arriving to Gleyre Academie ) with lights and colors, enhanced in the right way, could stand out from my screen to actually look like a painting. 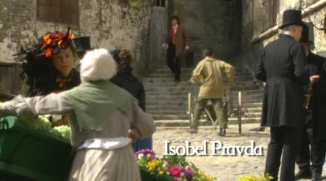 Lights, colors. Impressions of life. To see some of the paintings I knew so well coming to life, the film images becoming the real painting, gave me shivers and made me cry.

So much beauty, with so much troubled lives. The incredible need Monet had to catch the light, to catch life in that precise instant on his canvas, to express what he felt in his soul won my mind and heart. Some weeks after this first viewing I knew much more things about Richard. I had seen many Hobbit press junket videos, read interviews, discovered everything I could about that giant “decent human being”, as Martin Freeman said of him during Tokyo Press Conference. Watching Richard performing as young Monet again I found myself thinking about young Richard that, as a teenager, decided he had a goal in his life. Dancing, performing, trying to express what he had inside of him.

Watching young Monet trying to catch the light made me think of Richard trying to catch Thorin, to find the character in himself, always experimenting, always trying to deliver a line better, a better gesture, a better fight scene. I was thinking about him driving early morning (to not bore anyone) reciting Shakespeare, the Maori speech, Russian Choir Songs to “find” Thorin voice. I see men driven by their muse, with their need to express their soul, gasping to be understood but not eager to become famous. Men that want to live with their art and ask only to pay the bills with it. I see something fine. I am moved by the determination of these men to remain true to themselves following a dream that is necessary to them as the life itself. A dream that, simply, is life.

The Hobbit star Richard Armitage had an unusual introduction to the entertainment industry. ”I was actually in the circus in Hungary, doing a little bit of juggling, some skateboarding and a bit of tumbling,” says the tall 42-year-old English actor. ”It wasn’t my intention to get into show business in that way but it was an English company and at the time it was the only way I could get a union card to work in the theatre that I wanted to work in. So I was sleeping next to the elephants,” he adds with a chuckle, ”which felt like the bottom rung of the business for sure!”

We tried to make him not look like an ageing rocker but deep down I kind of did enjoy having that hair. “

We tried to make him not look like an ageing rocker but deep down I kind of did enjoy having that hair.

Hmm. There are a few other quotes from the recent press tour that I wouldn’t mind seeing illustrated.

Greetings from Tania and Richard Taylor, with a smiling Thorin and his Christmas Wish List. On it, several axes, including a Swiss Army Axe, Platform Shoes and oh yes, The Arkenstone.
Source
Thanks to KatharineD for sending this up.