I want to yell out, “Remember what almost happened last time?”

The tweet below is from Alyssa Bethancourt, a Richard Armitage fan and the author of one of my favorite blog posts here,  It tracks the entire Lucas North arc. For fans of Richard Armitage, and especially his Lucas North, this is a must if you haven’t yet read it.

Alyssa is asking for some  gofundme help with a family tragedy.

My heart goes out to Alyssa and her family.

This was my niece. She was 21 years old. https://t.co/RHiZSBUaYU

I’d love to have been a fly on the wall when he had that conversation with Richard Armitage, one of the stars of Berlin Station. He’d have been talking to a guy with substantial experience playing a spy – one who wore at least two masks at once, for a while. That same guy, at times,  also wears a mask when he is playing himself.

Excerpt by an anonymous actor in Berlin Station:

Whether Richard Armitage is also paying Farmer Rich, I don’t know, and it’s certainly possible, even probable, that he doesn’t always know what clothes to put on when he’s on his own; but, I cannot imagine him not knowing what music to listen to.

Thanks to Micra for this link.

Armitage fans are having a field day with surprises and shout-outs  (we think they are) in the latest episode of Hannibal – most notably, Francis Dolarhyde signing in to the Brooklyn Museum as John Crane, when the book gave him the name Paul Crane. We’ve been laughing and wondering whether the switch to John might have been acknowledgement that Armitage fans are so amused at his having played so many  characters named John.

There may be another inside joke in the museum scene that we missed, though not directly related to Richard Armitage.

Francis Dolarhyde tells museum curator Paula Harper, that he is doing a paper on  Butts, ( a patron of Blake’s) and that’s his interest in Blake.Paula Harper responds that usually Butts is just a footnote in Blake study.

True. And one of the most repeated Blake/Butts anecdotes recounts a time when Thomas Butts visited William Blake and his wife in a country house. He found them both completely naked in the garden. Naked in the garden?

Bryan Fuller and the Hannibal writers didn’t make up the Butts connection: it exists in the original. Interestingly, in the book, Paula Harper refers to Butts as William Butts, not by his correct name, Thomas.  Francis Dolarhyde doesn’t notice, chooses not to correct her, or doesn’t know she made a mistake.There’ve been some questions about Thomas Harris’s literary mistake in his novel – something Bryan Fuller simply avoided by leaving out this part of the conversation between Dolarhyde and Harper. (Yet, he chose to retain the Butts reference – well, butts are big in this show)

On the other hand, Fuller has given us more token Blake than Harris apparently did – just a small line from Hannibal quoting The Little Lamb and a cursory assessment of the Blake print, including it’s demonic sexuality. I’m hoping for some other Blake references or puns from Fuller.

Some fans might recall that in an interview, around the time Richard Armitage was getting ready for Spooks, I think, he mentioned that he was reading a book on William Blake. I’ve always assumed that this was part of the Armitage research method for his roles, and I always thought the book was the Peter Ackroyd bio/analysis. I hope he got something out of the book, because he sure didn’t need it for his role as Lucas North. Perhaps he did, because last year, he favorited a tweet about a Blake exhibit.

When the announcement that Richard Armitage would play The Red Dragon hit the web, many fans noticed the coincidence that Armitage was again going to sport a tattoo based on a William Blake artwork. I know I did.

Thinking about all of that in hindsight, I couldn’t help but try to imagine what thoughts might have been going through Richard Armitage’s mind when the whole Blake tattoo coincidence hit him as well.

Did he recall this scene in Spooks ( screenshots by Servetus) 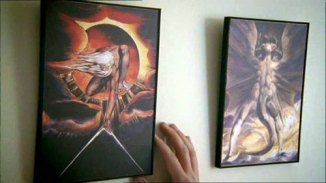 It occurred to me just today, as I was thinking about this, that the inclusion of The Great Red Dragon print along with the other Blake. might not have been just coincidence or a stab at symmetry by the Spooks set design crew. By 2008, that Red Dragon image, based on Thomas Harris’s book and the film, most likely was a recognizable icon of pop/cult culture for many Spooks viewers – perhaps more so than the other.

You might want to check out this link, which is an excerpt  from a book examining Blake allusions in Harris’s Hannibal books.  I can’t yet vouch for the author or the scholarship as I’ve only read a bit; but what I read supports what I remember from the book – Dolarhyde is interested only in the Great Red Dragon, and not in Blake as an artist, poet or oy – anarchist/visionary. ( compare to the Blake references in Spooks, which were trite and undeveloped, )

here. There are four parts, so keep scrolling.

ARMITAGE: Fans didn’t like [the Lucas North/John Bateman twist]. They were very upset about that turnaround. I feel like they felt like the rug was being pulled out from under their feet. But I remember sitting down with (producer) Andrew Woodhead before we went into series nine and he said, “We’ve got this crazy idea for the character, what do you think?” and I said, “Yeah, do it!”

Thanks to Micra for sending this.

here on Film and TV Now. 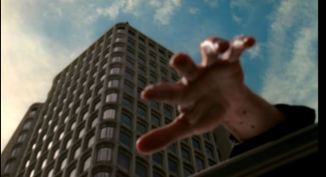 Then there is Richard Armitage who has gone on to do so well…” When asked if he is likely to come back, the response was rather tantalisingly ambiguous. “Well, we just saw a hand didn’t we? Who knows? He’s doing so incredibly well and he’s got lots of things lined up. So yes, I can see some actors stepping back into it further down the line