Dear Ken, the writing was so good we finished a day early.

A rare nod to a fan in a retweet, in support of Urban and the Shed Crew at Newcastle Film Festival. 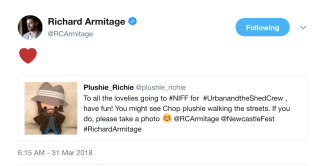 Is Richard Armitage spending today recording, or is this about something else? If it is a new book, I hope it isn’t Lauren Blakely, but maybe he’s referring to Heather Morris and an already recorded book.

.@audibleuk I'll give you clue. It's not Margaret Atwood or Muriel Spark… https://t.co/tWKAcInCQq

Even for this, some fans are happy to have him back.

To be considered in tandem with WOW on Servetus’s site,  about this tweet by Richard Armitage – I’ve been wondering about this since he disclosed his mother’s illness.

Please excuse my silence for a while. X

I regret feeling the need to spell this out instead of using craft to make myself clear, but nothing I’m writing or anything I feel is meant to be one iota critical of Richard Armitage in these circumstances. Nothing. Nada. Gornusht.

When Richard Armitage first tweeted about NHS and his mother’s twice-cancelled surgery, you didn’t need a super fan or medium to predict that a multitude of fan driven hopes and prayers would come his way via Twitter.

And so they did –  and they’d been still coming, along with opinions about NHS, some of it with welcomed professional information. For example, we learned more about exactly what ICU beds meant in context and what other options were available.

Some fans agreed that his initial tweet actually disclosing a private family matter,  his mother’s illness, was out of character – certainly not in his Twitter character. I think it was powerful and through the fandom,  he successfully brought attention to the NHS crisis through his personal experience.

Some fans  have been inquiring about his mother’s progress. Of course, like the rest of us, they  wish they knew that everything was okay for him. If one cared enough in the first place to send good wishes, one would wish the sense of relief of knowing there was a good result.  I would love to see him in the frame of mind to tweet something like, “Everything worked out, and thanks to the doctors and staff, yada yada yada.” I think we all would.

But he’s not in that frame of mind or has decided on another tack, at least for a while.  He deleted the first tweet, which blessedly cuts off replies, and in this second tweet, he ended with a kiss. ( isn’t an X a kiss?)

Perhaps at some point we will hear good news and perhaps we won’t. It’s possible that when @RCArmitage took step one, he didn’t think that much about step two. After time, he figured it out.

To be clear, the surgeon his team and all the incredible NHS staff who worked through Christmas and the New Year, have all been ready to go. Its the lack of an ICU bed, of which there are only 4, in this major NHS hospital #NHSCrisis https://t.co/OzEiTBz5k3

Frankly incredible that a major hospital, public or otherwise, would have only 4 ICU beds, even in non-crisis times. ( Which we all know are not just beds, but the accompanying and vital high tech monitoring equipment attached to each bed and increased staff ratio assigned to ICU units.)