And here I am, retweeting Cybersmile. https://t.co/tNrgk9uvau

Getting closer to the launch of the awesome exclusive with Richard Armitage and @CybersmileHQ Excited! #SCD2016 pic.twitter.com/mcv3wsyXI7 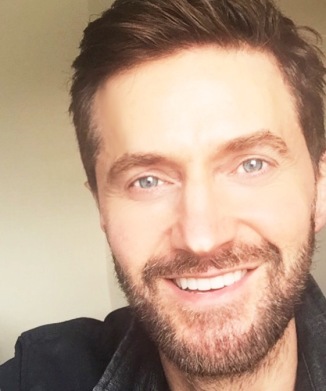 After I read Richard Armitage’s blog post for Cybersmile a few times, I chose not to read what any other fan said about his piece. I kept away from all social media. I have no idea whether my musings here are going to be from left field, center, or off base.

As many suspected, “empathy” is a key theme in Richard Armitage’s  Cybersmile post, though it was not all he discussed.

I understand and get that overall, Richard Armitage was once again sharing personal and professional experiences to make a point, the Cybersmile point, about watching our words, trying to see the position of the other side ( mainly by being empathetic) and, I think not being judgmental about other people’s actions – especially on social networks.

The main message is that we can hurt each other with words, which are our only weapons on social media, and we should think before we write – we ought to think about how what we say may hurt someone else – we ought to put ourselves in their shoes.

I wish that instead of the command must, that he would have said ought or  I wish people would. . . .

On the web our words are our weapons and we must try to temper them. We must consider the other persons [sic] feelings before we express our own, consider how our words wound. There is a much more dangerous undercurrent ‘cooking’ on the web also fuelled by words. It scaremongers, it rouses, it radicalises. In our own small way we can champion harmony, tolerance, balance and forgiveness.

Never underestimate your words. Use them carefully and for the better; if, like me, it’s the kind of society you believe in.

His reference to weapons actually harks back two paragraphs earlier, to his discussion of opposites: the good guys and the bad guys; right or wrong, and how such broad generalizations can be problematic ( my words not his), especially if the “sides” have weapons which they use in a final showdown. In a larger sense, he can be talking about the actual state of our society right now and in a smaller sense, he can be talking about communities on the web like his own fandom. I think he’s trying to say that it’s best to avoid the simplistic and look more closely at issues to see the other side’s point. This is a version of how he sees empathy, I guess.

If one just wants to take that broad message from an ambassador of Cybersmile and walk away happy. I think Richard Armitage achieved his goal, as many fans and readers will do and feel just that way.

Even I will, because I get what I think the tenor of his message is, what his mission as ambassador is, and let it go at that.

By now, I don’t expect him to be an organized writer. I had a comment once from someone in the know when it comes to actors’ writing, and she shared that many of them just shoot from the hip,  and are kind of loose with how they express themselves. [ETA: the commenter was HeatherParrish (see below) and her comment was on this post]

Now, I know there are some fans who think, we ought to leave it at that and not pick apart every word he says. But, just as you as a fan may be interested in where he goes, who he’s with, what he’s wearing, his career, his performances, his interviews, (me, too, for most of those – okay all of them), I am also interested in how he expresses himself when he’s communicating to me/us.

So, just to be safe, I’ll say it again – I have no real issue with the Cybersmilish sentiments Richard Armitage expressed, but I also think, as I have with much of his writing in the past, it’s confusing and one has to work really hard to get all of the message.

I think maybe he tried to address too much in this essay. Perhaps he was compensating for his Orlando tweet fiasco, because, he wrote this:

Make no mistake, there are ‘actions’ in this world which are inconceivable and abhorrent, but it takes a human being to make ‘intention’, action. It made [sic] be a damaged human being, a damaged society but we do all spring from the same place and return there ultimately, wherever or whatever you believe that place to be.

And then, he let it just sit there, until he went back to his good guy/bad guy theme, and the fact that words are weapons.

I think he was acknowledging  that despite the gray areas between good and bad guys, ( despite what he has just said)  there are, indeed, really bad guys. I’m just not sure what he wants us do about that or think about that. He left me, as the reader hanging. I don’t expect Richard Armitage to have a solution to maniacal, lone gunmen or genocide, and I’m glad he said something relevant about the horrific tragedies we’ve recently witnessed, but, this particular paragraph was one of those paragraphs of his that leaves me wishing he were a better writer. That’s all. I wish he were a better writer.

He starts off his post talking about empathy, and, goes on, for once, defining  what it means to him,

I believe every human being deserves empathy. That word is often misconstrued; to me it means ‘to put oneself in the shoes of another in the attempt to understand them’. It’s key to my work, and perhaps, as my friend the psychologist suggested, key to functioning harmoniously in society. Its a good word. It’s not easy to practice.

Richard Armitage’s definition of empathy is a tool I used as a lawyer – trying to put myself in the shoes of the the other side to figure out what he or she really wants, or what’s motivating him/her/them. That’s a psychological aspect of it which worked well because it gave me the ability to exert some control over someone else’s response and actions by playing into another’s feelings and motivation. But I wouldn’t really call it empathy.

Either way, unlike Richard Armitage, I don’t believe that every human being deserves empathy – either his version of it, or mine. I do believe that when I write, say or do something that involves another, I should, and always am, thinking about how it will be received. ( Well, except for those occasional blurt outs).

On the other hand, through my experiencing blogging and commenting, I know this – no matter how carefully  and precisely I say what I want to say, and mean what I say, there will be some readers who take my words with a different meaning, either by ignoring my actual words, or reading something else into them.

Richard Armitage also wrote about leaving ourselves alone, which he and his psychologist friend say means silencing those negative voices we all hear in our heads.  Of course, who can argue with the notion that we should try and break ourselves out of destructive patterns in our life? On the other hand,  I think those negative voices can be a positive in some respects and under some circumstances, and I don’t know if I agree that we always exert those negative feelings outwards, as he claims. I think this is one of those topics that can be viewed in so many different ways that it’s futile to discuss it from a distance.

Whatever, it seems to me that Richard Armitage has some difficulty getting rid of all of his negative voices, and may not be as easy on himself as he wishes us to be on ourselves.

I hope he reaches the point to which he aspires.

Meanwhile, he did a competent job for Cybersmile.

ANNOUNCEMENT!! Our Ambassador @RCArmitage has written an incredible exclusive piece (with photo!) for #SCD2016 Will publish tom, stay tuned!

Thanks to Micra for forwarding.

I think it fair to say that @RCArmitage expects his thoughts and how he expresses them, to be closely read and vigorously discussed. We can do this, right?

Is this related to this?

We know people make mistakes and how much we can learn from them. #ForgivenessIsKey pic.twitter.com/G42J20OSV6