Oughtabull Oratory.com just announced that fan favorite narrator, Richard Armitage, is currently recordingThe Bible for its Really Classics Division. Oughtabull is being tight-lipped about which Bible Armitage will be narrating. Producer Chancy Jewell said,” on the one hand, we think Richard  reading Scriptures/Bible/Torah is great material for him and will capitalize on his dramatic ability.”

On the the other hand, release is expected around Christmas, and the New Testament ( Holy Bible) would give Armitage the challenge of individualizing, through his voices, a company of  12 characters who can be hard to distinguish – to wit – the Apostles. Ms. Jewell went on, “Richard has the perfect experience for this – it’s another version of Thorin Oakenshield and  his  company of Dwarves, who were more or less indistinguishable from one another. We think Richard can bring each apostle to life, so to speak.”

Industry insiders close to the producers and creatives, who wish to remain anonymous in order to save their jobs, are enjoying the confusion. They claim the text to be narrated is an adaptation, or retelling of The Bible called The Bible: A Novel.  The  author(s) have not been named, but it’s rumored  that one or both of them have relevant experience novelizing stuff,  though there’s a penchant for changing the endings. That might be problematic.

Oughtabull Oratory and Richard Armitage have partnered numerous, many, lotsa, times before – even winning some awards together.

Lately, Armitage has been moonlighting with other audio producers including Audible, Oughtabull Oratory and Big Finish. Does he prefer to be heard, and not seen? Three other recent voice projects give legs to that assumption: The War of the Worlds – A radio drama; Castlevania, an animated series and; Wolverine: The Long Night, a dramatic podcast series. Armitage also has a voice role in cult VR film, Arden’s Wake, which has only been seen by a handful, but has received critical acclaim. For other news on Richard Armitage’s audio projects, check out here  here , and a very current discussion here

When asked what drew him to the work of narrating The Bible, Armitage said it was one of the first books he read as a child. He loved the story of Sampson who played around with his hair and beard to much distraction, and was a real contender.

Fans now are waiting for these audio treasures, available for pre-order and post order or in no particular order. A look at the @RCArmitage Twitter feed reveals the obvious – fans are already pre-ordering in huge numbers, without actually knowing what the product will be. Some fans have tweeted their support of the project 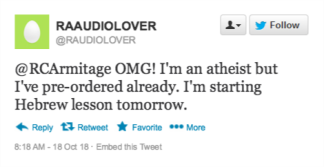 Fans who want to actually see Richard Armitage are eagerly awaiting Berlin Station, S. 3 – or a bit of it, The Lodge and My Zoe. The writer is not up on sales and distribution for these two films – only time will tell if we get to see them or when.

(NB: Richard Armitage was a contender, too. )

.@netflix How wonderful. Congratulations to everyone at Powerhouse. #Castlevania https://t.co/s1K4nXLIuG

@netflix #Castlevania Back in the studio for Season 2…(8 episodes) so much fun. pic.twitter.com/fmeCODbcM5

I wonder if he’s back in Austin, Texas for that.

A quick view of the @RCArmitage Twitter time line today included many heretofore unseen Tweeps – all on account of Castlevania. I’m curious ( and a little anxious) to see if these new fans look for more of his work, become vocal in the fandom, and if, so impact it might have.