It could happen. Here (Bryan Fuller to be show runner of  next year’sCBS’s new Star Trek series)

Ladies and gentledwarves, Thorin our King under the mountain. pic.twitter.com/9LQnUnkmtu 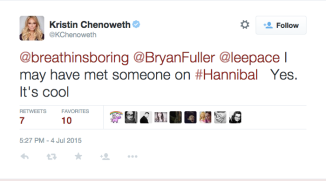 Excerpt:
Returning to your chief complicated hero/villain then, can we talk about that motorcycle jacket in the season three trailer? Are we about to meet Hannibal the action star?

We wanted to start season three with a ‘pop’ and I knew very early on that season three had to start with Hannibal Lecter in a coal Belstaff motorcycle jacket riding a great Hog through the streets of Paris.

( so it turns out the first murder we see is no longer a Dolarhyde murder? Oh well, not important)

Bryan Fuller gives good interviews, calculated to feed his fans’ desires to read a lot of what they want to know. Nothing wrong with this. In doing so he’s also super complimentary to his cast. I like this article very much because it gives a brief and easy summary of some of what’s gone on before in seasons 1 and 2, and also, of course, because what he says of Armitage. Which is really what we want to hear and know. Except – gosh – he pronounces his name wrong!

Fuller’s Red Dragon, as played by Richard Armitage, will be more than a bogeyman—he’s a representation of the struggle between sanity and insanity, rather than Good vs. Evil, which makes him all the more compelling. As with all good villains, Fuller and Co. have written Dolarhyde as though he were the protagonist in his own story.

“We’re not going to make it easy on you,” Fuller warns. “This man who falls for a blind woman and wants to take her to the zoo to enjoy the animals, who has arranged for her to actually touch them because she can’t see them—that is one of the most beautiful gestures I’ve seen in a romantic story. Yet it happens to be buried in the horror of a terrible, terrible killer of families. You see that this man is a contradiction; he is capable of beautiful and terrible things. And you can root against the monster, but you also need to root for the man, and hope he defeats the monster.” Fuller is careful, though, to point out that the fictional nature of the story makes this cognitive dissonance a little easier to handle.

A character walking that kind of tightrope necessitates the casting of an actor like Armitage. “It felt like it was Shakespearean in its storytelling, this battle for sanity,” Fuller says. “With Richard Armitage—who is a wonderfully trained actor, trained in theater—we found someone who could embrace the madness and generate great sympathy for what he is struggling with.” (For the record, Fuller pronounces the surname “Arm-i-tahj,” giving it the gravitas it probably deserves.)