That's @RCArmitage! I kind of wanted to take that statue home and put it in my backyard. For obvious reasons! https://t.co/mSdHO1G1Wz

Folks here and on Facebook have been wondering whether, in Alice Through the Looking Glass, is the statue/monument in the Underland town square supposed to be King Oleron, and hence, some likeness of Richard Armitage?

Here are the facts: First, the statue is wearing what looks like armor, and not necessarily kingly robes, though there is a crown; second, the statue has the long hair Oleron had in later life and not the short cut he wears earlier in time when he rescues his daughter. I can’t think why the King would wear a  long-haired wig later, even for a more formal occasion. I think his hair in the the coronation scene was supposed to be his own and the shorter cut and less kingly clothes were supposed to indicate that he was younger. And one bit of speculation – although the little girl is referred to as “the princess,” it is possible that at that earlier time, Oleron was not yet King, and therefore, the statue might not be of him.

I just don’t think we can tell, but you decide. Here’s what I have for you:

Statue from a distance, the night of the accident, earlier in time than the crowning. 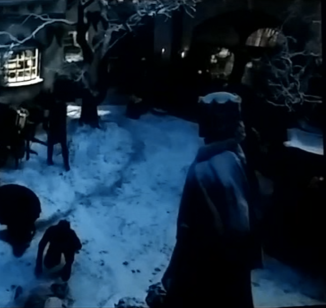 View from the ground, showing armor and a sword. ( I think, and if so, for a lefty)

And, a little something extra: 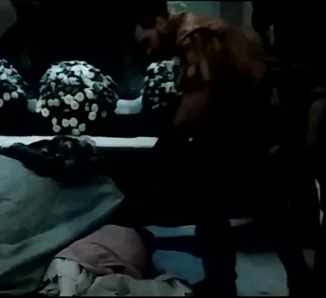 A funny thing happened yesterday on my way to see Alice Through the Looking Glass: I didn’t go. While I was walking to catch a cab, I was deciding whether to see the film or go to my Saturday paper mache class ( yes, paper mache – more on that another time, maybe). Last minute, I told the driver to take me to my class, and decided I would catch the film today (Sunday).

After class, one of my friends asked me if I felt like a ride to our North American specialty supermarket – an offer I could not refuse ( hello Sabra hummus, yellow lemons, and SOS scouring pads).

Always stationed outside the store, is a man selling bootleg DVDs. It’s not unusual for him to offer up films that are currently playing in theaters – but honestly,when my friend spotted Alice 2– which opened on Wednesday in Guadalajara, and Friday in my neck of the woods, ( the nearest woods are 2 hours away, actually) I was shocked. TWO DAYS? Anyway, after being assured that the film was in English ( with a choice of Spanish subtitles), I bought it for the usual 20 pesos ($1.08 US).

I’d bought Into the Storm from him at one point, only to find that it was in Hindi.

So, I took my purchase home, diddled with my external DVD player, and no matter what I did, the English menu choice was not available. I checked the file info, and there was only one audio track – Spanish) The film was dubbed. Needless to say, this practically defeated the entire purpose of my seeing this film to begin with. How could I forego the pleasure of hearing Richard Armitage’s speaking role?

What to do? Not watch at all and wait for today, or FFW to the Armitage scenes? I chose Richard Armitage NOW ( or then, depending on your view of Time)

For a bootleg. It was very good quality I thought, although there was an instance where I could see the silhouette of a man with a box of popcorn walking across the screen to his seat. The DVD quality is darker than the film in some scenes, which, according to some reviews I’ve read, might be a good thing. Anyway, I grabbed a few screenshots ( not great – here are the worst ones) 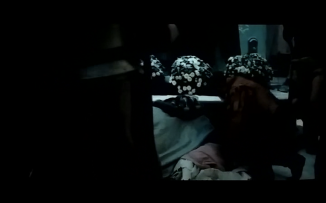 The King (Richard Armitage) bending down to gather u his injured daughter (see his foot? He’s kneeling) 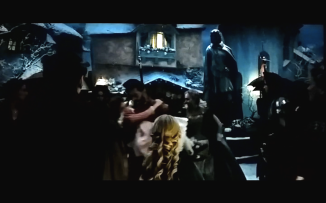 The King (Richard Armitage) with his daughter in his arms)

and planned to see the film today.

I’m not sorry about my choice. By yesterday, I already knew in which scenes I’d find the King, and I wasn’t too interested in the rest of the movie anyway. No matter if I made the wrong choice, because as we learned ( a lot sooner than Alice) you can’t change the past. ( Just ask Jamey and Claire Fraser)

Bonus! Three friends decided they wanted to go with me. I should point out that we’re in high summer here in Mexico, so a few hours in an air conditioned theater midday, has other attractions besides Richard Armitage.

A light lunch and 40 pesos later, we were settled in a cool theater, waiting with anticipation. My friends, at least two of them, know about my blog. I’ve explained a few times the how and why of it – Why Richard Armitage? But I think I need to give it another go ( though one of these friends watched, and liked, N & S on my recommendation and another is the recipient of Hamlet:The Novel, courtesy of Audible’s gifting policy,but she wasn’t there).

I went with friends, but I sat alone.

If you want a review of the film, check them out on line. It’s been pretty well panned from start to finish;however one reviewer said it was better than the first one which that reviewer thought was terrible – so . . .) I have not read one review which mentions Richard Armitage. Not that there’s much to say, except to note that he was in it.{ETA here -mention of Richard Armitage].

Here’s the thing though – I didn’t mind the film, and my friends liked it. There is some entertaining, humorous, quick-witted dialogue in parts, and lots of clever, if exhaustive, aphorisms and puns about Time. Also, I personally liked all the color and, especially the costumes ( except for Richard Armitage’s Burger King, Old King Cole get-up, a la Henry VIII and every fairy tale King we’ve met.) 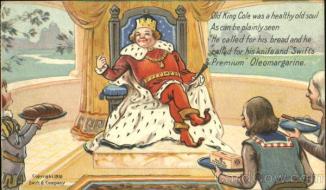 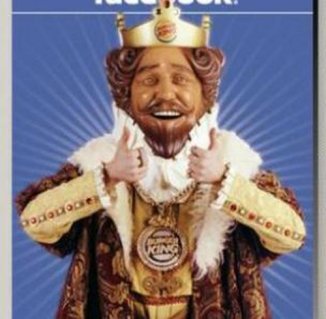 Here’s the other thing – the role played by Richard Armitage is absolutely crucial to the plot, ridiculous as it is. Essentially, it is a decision that The King makes that sets in motion all the evils to come. On the day that the King names his daughter Iracebeth as his heir, because of her huge head, the crown will not fit, and it breaks. The Hatter, as a younger man, giggles, and then everyone breaks out in laughter,  mocking and ridiculing Iracebeth. She  then exhibits some outrageous behavior that causes the King to change his mind and make her sister, Mirana, later The White Queen, heir to the throne. Iracebeth storms out, shouting that she hated him and hated them all. And this began her vendetta and later reign of terror.

This also explains the clip in a few of the trailers, showing a mechanical toy with an executioner that chops off the king’s head. The toy is a gift to the Red Queen, one that the gifter assumed she would enjoy, probably because she hated her father. 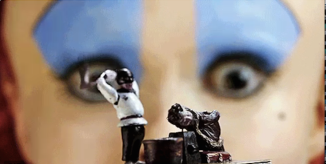 Now, some could argue that an earlier girlhood incident caused Iracebeth to become – well irascible, hateful and vengeful. Traveling with Alice through the past, we meet Iracebeth and her sister,  Mirana as young girls. When Mirana blames her sister for something she, herself, did, Iracebeth runs out of the house, distraught, and has a terrible accident, which Alice is unable to prevent ( can’t change the past). It is this accident which causes the Red Queen to have such a big and distorted head for the rest of her life. Even in Underland, it appears that she’s considered freakish looking. So, yes, this could have changed her personality, making her bitter and nasty, which, in turn, leads to her outburst at the crowning ceremony which leads to The King deciding that she didn’t have the temperament to rule, which leads . . . well, you get it.

I hold to my original theory though. I think Iracebeth was always irascible and selfish. Why? Because in that early girlhood scene, Iracebeth eats all the best part of her mother’s tarts ( the jam center) and leaves only the crumbs for her sister. ” You can eat the crumbs.” She was not a nice little girl to begin with.

Thus, Richard Armitage, as King of Underland, makes the fateful decision, in a delightful speech of satisfactory length – anchoring the scene,  standing in the middle of the stage, then walking here and there, all eyes on him. Don’t ask me whose voice he used. His American accent was perfect upstate New York on the Pennsylvania border.

( Only kidding) It was his. Thorinish, but not as dramatic. He was giving a lesson of sorts, though earlier, he also had a pained expression when his daughter was being mocked and laughed at by the entire audience. Good non-verbal acting – yup. Maybe he felt empathy, er, I mean sympathy or compassion.

One could pick apart many of the plot problems and character’s choices in this film. Me? I wondered why neither The King nor the Hatter realized ahead of time that the crown would not fit Iracebeth’s head and do something about it. Changing her hairstyle would have made the whole thing go away. (I also wondered where Alice was getting her wardrobe changes from)

In addition to the crowning scene, Richard Armitage, the King, who might just be a prince, then, appears just after Iracebeth has her terrible accident. The screenshots above depict this, and there are some here. His part of the scene really scooted by, but thanks to that bootleg DVD, I was ready. He was a younger looking King ( or Prince) and I think some closer shots or a little clearer screen time there, would have made fan girls swoon. Fan girls love when he  tenderly lifts victims into his arms (N & S, Strike Back, there must be others).

When it was over, my friends told me that they enjoyed the film.

And then two of them asked me, “which one was the actor you like?”

I sure hope he’s in costume in this selfie. WTF is that jacket?