Some of us have been wondering just what was meant by @RCArmitage and Bradford Winters meant when they tweeted that the first two episodes of Berlin Station would be available free on all platforms.

Commenter, Christine had and idea, which lead to another idea. 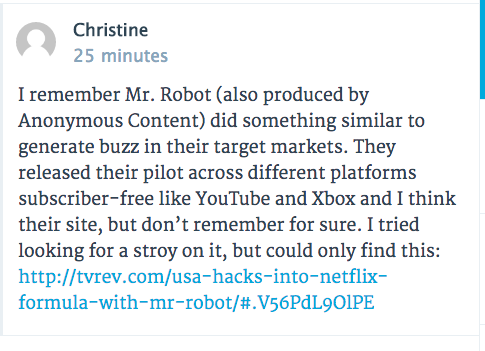 This is the link , to the article which described the clever way Anonymous Content and others generated interactive buzz on the web, and provided intentional “leaks” on Twitter and elsewhere, so that fans following the show, could see the first episode. The  marketing gimmick for Mr. Robot has some similarities to what we’re seeing for Berlin Station – which also might make use of “leaks.”

In addition, I found this Variety article announcing that two Showtime shows were being aired on “al platforms” for free – the shows were the Plot for Dice and the season Premiere of House of Lies, aired on multiple platforms, including Hulu and You Tube.

This would really be neat, although, Richard Armitage, in his tweet, was pretty specific that the two episodes for would be made available “across the US.”