The statue and its proper I.D. are a topic; see also, here  and here:

.@teamsuz End our statue debate: Is this @RCArmitage King Oleron or his pops? 👑 And can he come live in my garden? 🤗 pic.twitter.com/y9GaNWnSPF

This is the Richard Armitage fandom playing the way I like to play best in Armitageworld. We (fans who like to share this pastime) make so much about so little: we create agency where there was none.

Hell, the buzz about that statue might raise the revenues of Alice2.

Auctioning it off would definitely raise the revenue of some charity, maybe an Armitage favorite.

It’s not a small issue for Armitage fans. I think whether the statue is the old king, or our King, or someone else – whatever the set designer and director had in mind – they had in mind that Disney was going to create a statue that at least resembled Richard Armitage. Intentionally. On Purpose. They made an effen’ statue of Richard Armitage.

That’s a nice effort, a sweet touch, for a cameo. I can see in my mind’s eye, Peter Jackson inspecting a couple of versions from Weta, and selecting one or suggesting a modification. (My mind’s eye doesn’t really know James Bobin.)

And there’s little question that the mechanical toy King in the film was certainly made to look like Oleron, hence Armitage. (Another potential fundraiser  for charity- yes?) 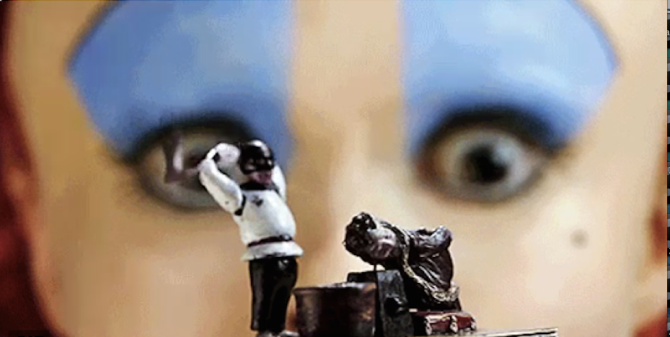 For Richard Armitage fans, this is the cameo that keeps on giving.

We seemed to have low expectations initially – at one point, ignoring reason ( i.e. the stand-in on IMDB), we were worried that he’d be the voice of a chess piece or a mechanical toy.

When we learned from an insider that Armitage had speaking lines, we perked up. Then there was the mystery of the second costume. Was it  just clothes he was wearing under his robes or a second costume? Where was the long-hair wig? Typically renaissance court garb, very Shakespearean, Romeoian. What was up?

In the end, this is the cameo that keeps on giving. The performance is quite good on it’s own, but for fans, it has somethings special. For fans who closely associate Richard Armitage with majesty, especially as the King Thorin, they got another King -and a fun coincidence – King Under the Mountain, King Under [the] land.As a matter of fact, if you look at the words/names Thorin and Oleron side by side, they’re in harmony.

For almost all fans who revel in his more formal theatrical side, (Thorin again, even Thornton, Proctor) we got some speechifying. We got The Voice.

Was ever so much packed into 2 scenes running under 3 minutes ? ( though he had less screen time than that) There is something in Alice Through the Looking Glass for every Richard Armitage fan out there.

We got a statue!

We agree, it makes no sense for the statue to look as it does and be King Oleron in terms of the plot line. King Oleron did not look like the statue when he was younger, unless he chose to wear a long-haired wig for all formal occasions. He looked more like the statue when he was older. So maybe it’s his father. I still think there are elements of warrior garb to the statue, ( no sword, though) especially from the rear and top, because it looks like he’s wearing a battle helmet/crown, as I’ve seen in Shakespearean works – most recently in The Hollow Crown. But maybe the sculptor was inept, and what I think may be helmet, is hair, with very little detail or definition. The pantaloons are wrong for war.

On the other hand, there might be something fateful at work when  young Iracebeth is looking up at her father’s looming image while lying under it, after she injures her head in that life-changing accident (and BTW the statue’s head starts to crumble a little). “If only I hadn’t run into that friggin’ statue of my father!”

Later,  at the ceremony, she sees Oleron as a similar image, in the flesh,  and when she she acts out), he denies her crowning, depriving her of her status as future Queen.  She loses her head, her head piece, and her headship. This  is the origin story for her iconic mantra “Off with their heads.” Even later, with the mechanical toy, she looks at a similar image  as the statue when she symbolically acts out her mantra, ” Off with his head.”

Oops, my head has  head jokes as I head out of this scintillating analysis of Iracebeth not getting head. This is a good place to end.

No matter who the statue really depicts – WE got a statue, and it has no limitations to the pleasures it’s giving.

7 thoughts on “The Statue of No Limitations”