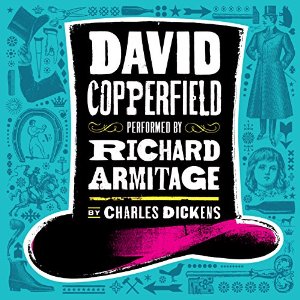 I’m almost 75% through with David Copperfield, read  by narrator extraordinaire, Richard Armitage. It turns out, I can take more of it than an hour at a time, and despite falling asleep more quickly than usual ( I put in on before bedtime, as well as other times), I’m not hating it now that young David’s worst childhood abuse is over.

For a good part of my listening pleasure, I’ve been multi-tasking. For example, I retyped and edited my temple’s Purim Schpiel while listening to DC, including making some modifications to the really dumb, and poorly crafted poetic narrative in the purchased version we’re using this year. I’m also playing a lot of Midas Mah Jong and doing some adult coloring. Mulligan the cat is also benefiting. He learned to fetch,( pipe cleaners) so while I’m listening in bed, I toss a pipe cleaner figure into the hall for him to fetch; he brings it back; we start again.

I’ve been whining over the choice of this novel, and the 36+ hours I’d be devoting to it.But there it is. Maybe Virginia Wolff  had something  ( or maybe she took something) when she, who didn’t admire Dickens, said,  David Copperfield is the the most perfect of all the Dickens novels[.] Now there’s a Jewish compliment if ever I heard one. (Your hair looks so much better that way).

I thought I’d share some random thoughts – not really doodles – because I wasn’t unconsciously making these notes.

I know that Charles Dickens’s characters are not all meant to be reflect real personalities – but more like exaggerated caricatures. This is certainly true of many of the denizens who inhabit David Copperfield – but none gets my goat as much as Doady’s beloved Dora. In a comment I read somewhere recently, I think by  JHolland,  she referred to certain female characters  ( or maybe real women) as too dumb to live. This is Dora.

As it happens, some  critics actually attribute the epithet “dumb Dora” to Charles Dickens’s Dora. I want to stab her through the heart, because I don’t think I can wait much longer for her to die. Yes, I know choosing romantic partners is not David Copperfield’s strength, though he has many of others, but his doting over Dora is just too much for me to take. Die, Dora, die. And it pisses me off because he knew what she was like before he married her. By the time he meets Dora, DC is already quite adept at sussing out most of his acquaintances’ true personalities, failings and strengths.

Another thought – will Richard Armitage every get away from dwarves and elves, or are these creatures so ingrained in English literature that it is no coincidence that he keeps coming across them? I always wonder what he’s thinking when, in a role or a narration, Armitage comes across some character or situation that mirrors his past work.

In David Copperfield,  we meet Miss Mowcher, a middle aged dwarf, who happens to also be a hairdresser. How convenient, I was thinking, since Richard Armitage’s favorite dwarf could always use a good hairdresser.

I wonder what Richard Armitage was,thinking, if anything, when it turned out, he was  a proctor again?

After listening to 24 hours of DC, I’ve decided that listening may be the best way to enjoy this story. The film versions, while shorter and easier to manage, leave out most of what DC is thinking, his assessments of personalities, his ironic wit, and his sometimes ridiculously malleable manner. Yet, with an expert professional reading the convoluted sentences, they’re kind of easy to follow. Let’s let the narrator do the hard work.

Which brings me to another thought – I have to work a little harder on my own sentence structure, because I’m seeing some similarities between my writing, and some of Dickens’s highly punctuated, breathless sentences ( with lots of parenthetical thoughts) and digressions.

I’m getting a kick out of some of the foreshadowing – especially when the reader can figure it out before the narrator does. I’m especially thinking here about James Steerforth, whom DC so admires, from his early school days until the date of Steerforth’s terrible deed. David admires Steerforth because he’s handsome, classy, fun and smart – but right from the beginning, when we first meet Steerforth, his sense of entitlement and rank results in a vicious attack against schoolmaster, Mr. Mel, who winds up losing his job over a secret Steerforth discloses. How is it that DC forgets this throughout most of the rest of their relationship? It’s the sort of cruel action that the character, as drawn, would have been expected to take into account early on.

I see some similarity between how DC manages a dinner party and how I do. Back and forth to the stores, too much food, unexpected mishaps, but a good time had by all. ( I’m thinking here about the time the sous chef/ server I hired didn’t know she had to actually emulsify my truffle foam, and a first course that  cost about $ 200 for 6 wound up a soggy, funky mess.)

For at least one of his characters, I think Richard Armitage channeled a bit of Don Corleone for his voice. I can’t say that I recognize the voice of every character without some hint, and for the life of me I can’t figure out why Aunt Betsy has a Scottish brogue  (but I like it).

I played with the idea of listening to a different unabridged audiobook of DC, just to compare the narrators – but I’m not a masochist. ( Still, I am pretty curious.)

I should have more to say at some later point, if only to announce that I’ve completed the book.

I still don’t like this choice for an Audible book, and I wonder how sales are going. The book is listed as  the number 4 best seller in the Classics category, though we’re surely not seeing glowing promotions from Audible. But then, maybe the audience is taking the serial route, and it’s too early to tell.

9 thoughts on “Dickens’ Dumb Dora and other Doady Doodles”