Of course I recognized the quote, which means I am a Berliner, and have no deep criticism of Richard Armitage using the phrase: I’ve heard people throw that phrase around in similar contexts.

What I didn’t know about was the controversy surrounding Kennedy’s choice. It’s hysterical. It turns out, that many who heard and/or analyzed the phrased, argued that what it actually meant in Germans was, I am a jelly doughnut. 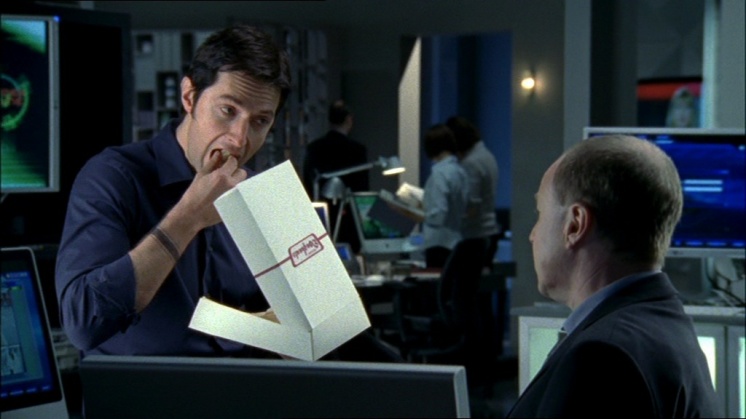 There is a misconception that Kennedy made a risible error by saying Ich bin ein Berliner. By using the indefinite article “ein,” he supposedly changed the meaning of the sentence from “I am a citizen of Berlin” to “I am a jelly doughnut.”

The indefinite article is omitted in German when speaking of an individual’s profession or residence. But it is still necessary when speaking in a figurative sense. Since the President was not literally from Berlin but only declaring his solidarity with its citizens, “Ich bin ein Berliner” was not only correct, but the only way to express what he wanted to say.
It is also true that though the word “Berliner” [9][11] is used for a jelly doughnut in the north, west and southwest of Germany, the word is not used in Berlin itself or the surrounding region, where the usual word is “Pfannkuchen.”

here ( and many other sites on the web)

John F. Kennedy’s handwritten notes ( with pronunciation). Some said he added “ein” in, himself, though he worked closely with a translator for the speech.

Journalists and others staunchly defend Kennedy’s use of the phrase, arguing that it was perfectly correct. Every conceivable point is covered, from whether Germans even eat  or make those jelly doughnuts in Berlin, or call by them by a different name, to whether  it was inappropriate for Kennedy to leave out the word ein, because, with his atrocious accent, no one in the audience could believe he was actually a Berliner – so he must be speaking metaphorically.

I fully realize that it’s an enormous stretch to compare the JFK Berliner controversy and some random  Richard Armitage interview, but I can’t help thinking of last week’s discussions about the Mirror interview of Armitage. Honestly, no need to point out the obvious differences to me, but the similarity is my interest. The similarity is in the zealous polemics of some uncritical-leaning fans, challenging the paper, the interviewer, the timing, Armitage history, and even the very rules of grammar and journalism, to defend their man.

I’ll also concede that some more critical fans might have been too harshly critical, in my opinion, straying far from the quotes themselves.

A recurrent theme when these events flare up, is whether fans should discuss, dissect,  even hold Richard Armitage accountable for everything he says, in every environment, or whether doing so means you’re not a loyal fan. You know my answer to that. I’d love to sink into that Christmas message and go through it with you line by line to discuss what I think he meant, vs. what he actually wrote ( whether I agree with  each  underlying premise or not), how he should have said it better; how a sentence here or there made no sense, or didn’t belong in that place. I’d like a discussion on his writing ( punctuation, R-O-S-organization, non-sequiturs, misuses homonyms, as well as his content. )

I’m tempted to leave it at this: Who eats hot cranberry sauce?

But back to The Message and the Mirror.

A good portion of the Mirror discussion was directed at Armitage’s role choices.

I think Richard Armitage partly answered  this question in his  2015 message, albeit, with a few grammatical  and diction oopses.

Thank you for your continued support to myself [sic] as an artist, but also the enthusiasm shown for the various charities and causes that I’m interested in. Of course these will change and evolve, as my day to day existence continues to evolve.

A fan can read these words in a number of ways. I read them to say that he’s especially thankful for his fans who support him as an artist and those who support his charities and causes, but at the same time, he’s warning, advising, noting, notifying, affirming (choose your word and tone) that this will continue to change. He will continue to change, not only in his preferred causes, but also as an artist ( and I think as a person).

While I don’t think as my day to day existence continues to evolve, is exactly right, I’m inferring that in these  two sentences taken together, he’s reiterating that he wants to be supported as an artist and his artistry ( role choices, genre,) will continue to change. Evolve doesn’t always mean grow, but I think he means grow, and definitely change.

This is some of what he meant to say in The Mirror interview. This is certainly what many commenters said in response to his role choices. He just said it so wrong.

In column 2, after his political. sociological statement [inappropriately referring to quotation marks as a parenthesis  (can’t help myself)], he says,

If you believe in a similar philosophy, thank you for your ear, [sic] if not[sic],  that’s ok too [sic] it’s only my opinion.

Without getting into what exactly is his philosophy, the best reading of this is that it refers only to the antecedent  I’m an actor and what follows – the opinions in his political-ish statement.

But a secondary reading is also possible. He’s clearly talking to this fans, because (a) who else would be reading his Christmas Message? and (b) that reference to Pinot Noir.

He’s acknowledging that not all his fans are going to agree with him on everything, and it’s OK if they don’t. I’d like to think that his sentiment also applies to the first part of his message. While he might not have specifically thanked every sort of fan, I can be content with what I see as the thrust of what he meant.

I think he’s OK with criticism and some types of dissent.

As to the rest, I look forward to any discussion on the content of his Message.

41 thoughts on “Some Things About The Armitage Christmas Message”