Nine days since my last post. Longer if you ignore the pieces of news and look for something actually composed. My fellow bloggers are  making better efforts, but may seem to be experiencing some of the same.  JHolland  has, Servetus notes sometimes fans need a recharge, Kelly’s metioned the struggle and Guylty has commented on the quiet. There are other examples.

The lull in the fandom may be a cyclical event. In the past it was a let-down feeling after all the activity surrounding the release of a new movie in three past Decembers and Extended Editions in Novembers. This year maybe it’s related to the freneticism and side-issues attached to Urban and the Shed Crew – we saw and heard lots of live Richard Armitage, yet there was the frustration of so many of us who didn’t see his work.

This could be one of my Richard Armitage Recharges.

Thank our stars (or our star) for Berlin Station, set in stone with a wide release. TV is fine by me.

No doubt, the holiday season is a factor in regular bloggers’ distractions, and others of us are  in the middle of  other things. For me, it’s more home improvements, impending travel and work on my synagogue’s annual Jewish Film Festival –  procuring, viewing, culling, arguing over loads films with Jewish themes or creators with the goal of settling on  a series to be shown 9 Sundays in a row.

Lucas North is always a reliable recharge for me. John Porter often does the trick, and listening to Hamlet helps. 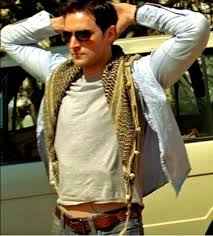 This time, I went in a different direction. It’s a known phenomenon that the need to know all things Armitage, prods fans into other areas of interest, whether one rediscovers Arthur Miller, learns about finding an indie film distributor, studies mens fashion, delves into the history of monasteries and various orders – whatever it is – we learn about, teach ourselves other stuff, rare brain diseases, included.

I’ve frequently conceded I was never a Tolkien fan. I had to force myself to watch AUJ when I first became an Armitage fan. I saved it to the very end of what I could find of Richard Armitage’s work. I was mostly bored the first time ( I hadn’t yet read The Hobbit, but that bored me, too). But Thorin Oakenshield. All that changed after The Popcorn Taxi Interview and as Peter Jackson drew me in with his blogs and extras.

It wasn’t long before I was fully engaged in the excitement of Desolation of Smaug and my big screen experience was unforgettable.

So, over time I have dabbled in a little Tolkien.

It took a year, and I finally watched The Lord of the Rings trilogy, but without the director’s extended edition and the extras, I knew I was getting half the story. I watched some documentaries on Tolkien and listened to some lectures.

But now, thanks to the Armitage connection, I am finally getting the whole story. I’ve begin listening to a wonderfully narrated, beautifully sung, unabridged audio book of the complete Lord of the Rings trilogy. And as I listen, I envision Peter Jackson’s Middle Earth. I’m in Bree right now, at The Prancing Pony.  Frodo is about to meet Strider, but what I’m imagining is a rainy night and a short, wet, shrouded figure making his way into the tavern.

Meanwhile, the fandom is in an ellipsis, waiting to see what’s at the end of the third dot.