I predict that BBC’s Poldark, with Aidan Turner is going to be a favorite. It has everything BBC content lovers appreciate: a period piece, a decent story, historical significance and a smoking hot star who is already showing some excellent chemistry with his love interest.

Although this version is much shorter than the previous version, which ran for years, the first episode set up most of the relationships and conflicts without it seeming crammed in.

Aidan Turner is going to do alright in this. My first impression so far, is that In the first episode, Ross Poldark was mostly angry and disappointed over all the loss he suffered while he was away at war. There were a few times when I thought his delivered lines were stilted, but I’m going to blame it on the writing. I found this to be so especially in the dinner scene when he first returns to his uncle’s home and learns that his beloved Elizabeth is to be married to his cousin.

Unlike in the original, I think Poldark’s attraction to Demelza has been ignited rather early – but well, they only have about 6 episodes.

It seems that a number of fans are dissatisfied with Poldark’s war injury”scar.” But hey, I can understand that the director didn’t want to mess up that striking face, so they went for something subtle. For some fun about the scar, read this 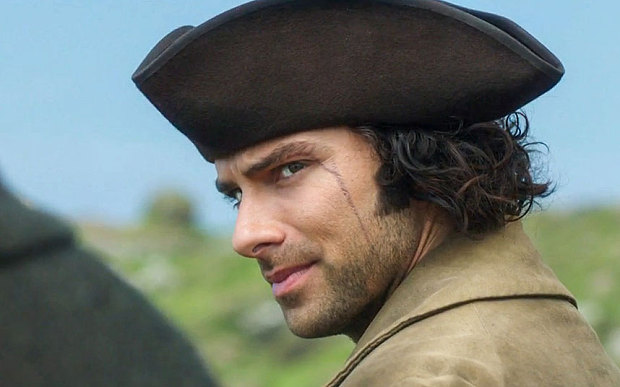 8 thoughts on “Side Dishes: Aidan Turner as Poldark. It’s Good”