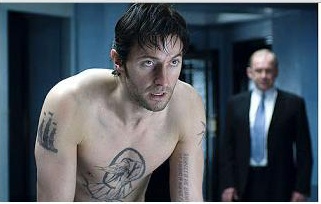 Since the first heart-stopping reveal of Lucas North’s naked torso displaying the tattooed image of William Blake’s “Ancient of Days ” (The Tattoo), fans of Richard Armitage and Spooks  have struggled to reconcile Lucas’s rumored admiration of the British poet, William Blake with what we know about him. here  and here  For example, why are we so fascinated with Lucas’s  fascination? Maybe because we don’t buy it. We don’t believe the rationale offered by Lucas’s ex-wife, Elizabeta: “Blake was a visionary and distrusted systems. Lucas is the same.” (Spooks 7.2). It doesn’t square with the spy we know. Yet we can’t ignore The Tattoo. It is front and center, a Blake icon, the  geometric composition  balanced and striking.  His other tattoos are crudely drawn,  blue ink  on ashen skin from years of confinement; but The Tattoo is artistic, familiar, especially to the British, and hauntingly beautiful. For me, it surpasses in beauty the garishly colored original. We ache for  Lucas,

Yet the beauty of  The Tattoo is some comfort. We need to know more.

And then there’s the anomaly. What the hell were the Spooks writers thinking when they described as an anarchist, a career government employee who, continually put his life at risk and endured eight years of torture and  prison to help protect and preserve the political and economic systems in place? How is Lucas North a “visionary” no matter what definition of the term is used, whether it be “a Utopian,”“one who sees the future with imagination” or “one who sees visions”?  On the other hand, there must have been some reason driving  the writers to define some aspect of Lucas’s personality or history with a connection to Blake when they first drew his character.  Whatever it was, except for a passing screen shot in season 9,  the crew entirely dropped the  matter after Lucas’s second appearance in episode 7.2.   Was this just another example of  Spooks writers lazy continuity, or is there another explanation?

If the goal was to give Lucas a softer, more  romantic side as a poetry lover,  then William Blake makes sense. Lucas, having grown-up in  England,  would know at least something of Blake, if not by study, then by osmosis.  Blake’s song, “Jerusalem,”  is the unofficial national anthem of England.  It is sung regularly, as well as for special occasions, for example,  the opening ceremonies of the London Olympics and the royal wedding. Despite the unapproachable aspect of Blake’s most important work, much of his earlier  poetry is very accessible.  It appears in most  poetry anthologies.

It’s less likely that Lucas would have been as conversant with Blake’s later canon of work, referred to as The Prophecies. These are a collection of related  epics  for which Blake created a complicated, overlapping, original mythology with many characters. Urizen  (often pronounced U-Reason)  the figure in The Tattoo, is the antagonist.  Urizen is Blake’s bad guy. ( Blake’s hero is sometimes the figure in the second print Lucas owned, shown below.) If Lucas knew even one of the Prophecies, he would have known that Urizen  is the allegorical symbol for,  among other things, Reason  and that he was in favor of systems. For Blake, Reason is stagnant and destructive because it stifles imagination, creation  and the sense of self.   Blake’s Urizen was the bad guy because he was the opposite of anarchy. Lucas  would not choose a depiction of Urizen as an emblem of anarchy. No one would if  he or she admired Blake.

Maybe the Spooks writers didn’t know, because they offer us nothing to resolve the inconsistency.  Lucas never mentions William Blake.  The image in The Tattoo is never identified.  Lucas does have  two popular Blake prints in his new flat, one of which is the same “Ancient of Days” as the The Tattoo . The other is “The Great Red Dragon and the Woman Clothed In Sun.” That’s Blake for you, the god figure is the bad guy and the dragon/serpent is the hero. Lucas should have chosen the great Red Dragon if his back story were true –but the Dragon is neither beautiful nor suitable for the purpose.  Imagine that obscene tail trailing down Lucas’s front pointing directly past his middle waist. Not pretty. 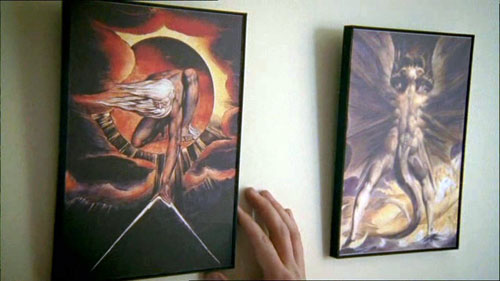 I suggest that The Tattoo came first, and the back story was a halfhearted attempt to explain it.  The writers had to give Lucas North tattoos because he spent eight years in a Russian prison. As Lucas tells Harry, tattoos show that you belong, and there is a strict iconography to their meaning. Don’t forget, these are the same writers who wrote the scene requiring Richard Armitage to give water boarding a try, for authenticity. And as it turned out, all the tattoos generated lots of discussion, analysis and attention,  so it was a good move. The Spooks boys didn’t bother telling us the meaning of the iconography, but you can find explanations of each of Lucas’s tattoos -except the Urizen – here . The explanation given for The Tattoo is speculative because the writer didn’t find it in her research as she did the others.  She reasonably considered it a religious image because the actual “Ancient of Days’ comes from the Bible . Blake did not consider Urizen to be a religious figure.

I believe that the writers needed just the right tattoo for Lucas’s chest.  Probably the make-up team scouted books for images to make transfers, and they came upon The Tattoo.  They needed an outline form for practical and aesthetic reasons. It had to be recognizable. “The Ancient of Days” is iconic. It’s  on everything from  T-shirts to tote bags.

Clearly it was of  little import that The Tattoo was not a bona fide Russian prison Tat or that it is the one piece of Blake rt that no self-respecting  anarchist would choose as an emblem. Even the sole explanation they do give us shows a lack of interest. The phrase that “Blake was a visionary and an anarchist” is as ubiquitous as Ancient of Days. It appears in the title of many books and articles about Blake, and is how “he” described himself on his Facebook page.